This is definitely one of the coolest cars I've seen at a car show in Japan. And I've seen some doozies. 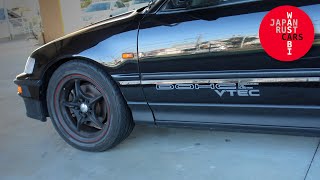