It's not often you see mint, low-kilometre, one-owner cars that are almost 50 years old, but this rotary-powered RX3 coupe is just that. It was sold new in 1973 from Mazda Auto in Kitakyushu, and has travelled just over 30,000 kms in all the years since.

This first generation Mazda Bongo van really takes me back to when I was in grade 3 and 4 and a neighbour would on occasion take me and my s... <More> 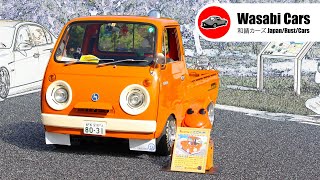